Houses for sale in Winnipeg: Wildwood

Houses for sale in Fort Garry, East Fort Garry, and Wildwood, Winnipeg have communities that contain some of the city’s most-expensive homes on South Drive, which hugs the Red River and leads to private school St. John’s Ravenscourt, while just across the street from South Drive is the unique neighbourhood of Wildwood Park, where everyone’s backyards are interconnected with no roads or cars infiltrating the whimsical woodlands. The main thoroughfare for the area is Pembina which contains all manner of cuisine in its distinct strip malls including some of the city’s best Chinese and Korean restaurants.

Fort Garry, East Fort Garry, and Wildwood form the MLS® area 1J. The greater city area, considered simply Fort Garry, has neigbourhoods running alongside both sides of Pembina offering a range of housing prices from bungalows in Fort Garry proper, to large multi-storey homes in the older area of Whyte Ridge and the new ever-expanding burbs of Bridgwater, to farm-style abodes down in St. Norbert, where the city meets the prairie. Due to the constant growth of the Bridgwater area, more and more amenities like restaurants and shopping continue to pop up, however the area lacks primary and secondary schools. 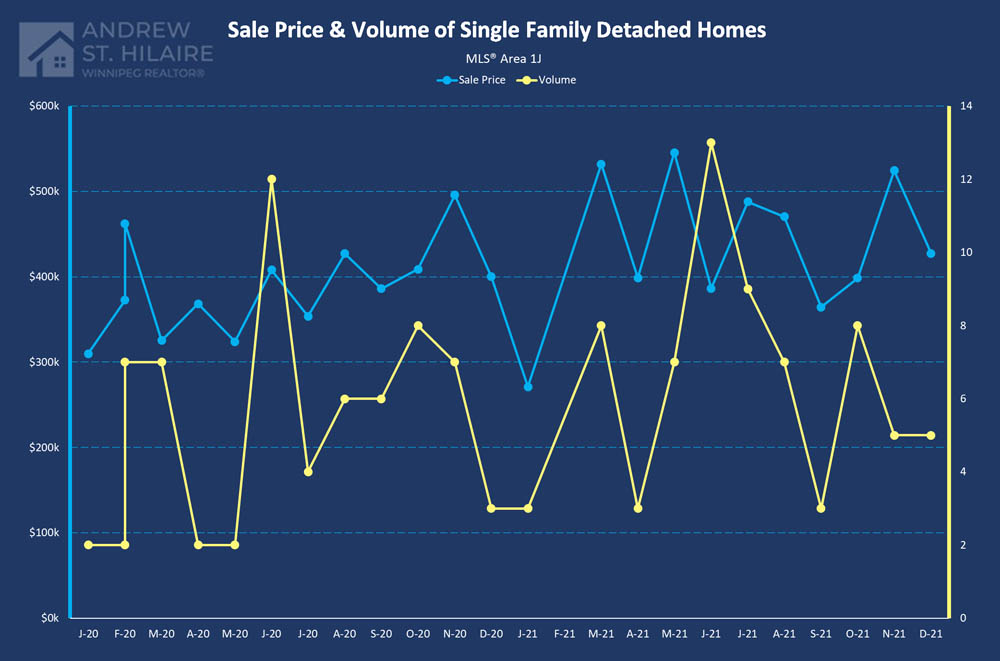 The total units of single family detached homes sold in 2021 were
78
for this area compared to
61
in 2020. The graph shows the sale price and volume for the last two years broken down by month.

The total units of single family detached homes sold in 2022 were
78
for this area compared to
61
in 2021. The graph shows the sale price and volume for the last two years broken down by month.